Shopping is unique in being an instrumental activity that is both essential and potentially involves key areas associated with successful ageing, i.e. cognitive activity, physical activity and social engagement. Yet shopping in general and its potential as a site for promoting healthy and social activities have been largely overlooked in gerontological research. This is surprising considering that population ageing has challenged traditional notions of ageing and what constitutes ageing well. This should compel us to think about healthy ageing (and ageing research) in new and creative ways. In my doctoral research I sought to address these issues using a mixed-methods approach drawing on secondary analyses of large scale surveys as well as interviews with older people on Merseyside and in North Wales (as part of CFAS-Wales).

Although previous research has shown that current cohorts of retirees are increasingly engaged in consumption there is little research exploring either how older people view shopping or how the range of activities that shopping encompasses may contribute to health in later life. In the UK, gerontological research in this area often is limited to older disadvantaged people and food poverty or to large-scale statistical data with measures of consumption. Thus, there is a lacuna in our understanding of the everyday shopping activities in later life. It is possible that this is because the topic has fallen between the research interests of gerontology (which typically overlooks shopping) and consumer research (which until recently has overlooked older people).

Firstly it is important to be clear that shopping is not the same as consumption. There are an increasing number of studies on the spending habits of older people, mostly by market researchers who are keen to unlock the potential of the ‘grey pound’ or the ‘silver dollar’. However, whilst shopping may involve consumption of goods or services, it encompasses a much broader set of activities, which may or may not result in a purchase, e.g. window shopping.

Secondly, it is important to correct a pervasive myth that older people do not like shopping. For my PhD I analysed data from the UK Time Use Survey (conducted in 2000) which showed that 59% of those aged 65 and over reported liking food shopping compared with an average of 47% of those younger than 65 (age breakdown below). Hence it is clear that older people do enjoy shopping as much as younger people. 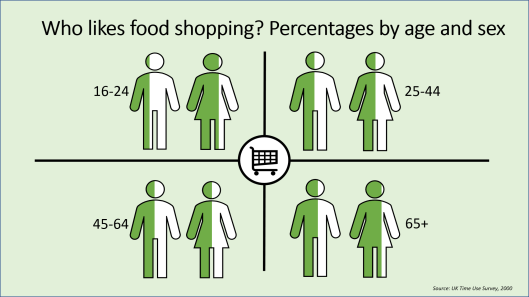 Population ageing means that we need to be more creative about how we promote healthy ageing and shopping might be one such site for intervention. The relationship between shopping and healthy ageing is complex and circular but my findings show that shopping activity is a viable area of research that has implications for health and wellbeing.

Shopping activity provides an outlet for health-promoting activities and may provide protective factors that alleviate or ameliorate health declines in later life. As an avenue for social activity, and as a way to maintain independence, shopping activity directly impacts on wellbeing in later life. Maybe now is the time to re-conceptualise the role shopping may play in contributing to living well as we age.

Shopping is a social activity that provides older adults social engagement, support, and capital. The importance of such social activity was clear in what many of my respondents told me. The use of shopping as a means to get out of the house was common throughout the interviews, especially for those who live alone. Interestingly, going shopping to get out of the house was considered social even without involving direct social interaction; that is, people went shopping simply to be around other people. For some of my participants with health or mobility problems, shopping was the only time (or one of few opportunities) to leave the house and to get social interaction. For those who received instrumental support to do their food shopping these shopping trips were seen as important both for maintaining independence and as an enjoyable social experience. Thus, perhaps it is less important whether or not people say (or think) that they like food shopping. As a necessary activity, which gives a reason or excuse to get out of the house, going shopping enables people in later life to get valuable social contact.

This fits with recent research by Age UK highlighting the importance of supermarkets and other retailers to the social lives of older people. Age UK claims that many older people would have no one to talk to if they did not go to supermarkets.

Tasks associated with shopping such as handling money, decision making and memory use may contribute to the maintenance of cognitive function in later life in the same way as doing other complex cognitive tasks. In my research, a small number of participants talked explicitly about shopping as a mentally stimulating activity. This was especially evident when people discussed planning supermarket trips and deciding what products to purchase depending on prices and special offers. Many interviewees made shopping lists as a memory aid and, regardless of whether or not the list was taken on shopping trips, the act of making a list in itself served as a memory aid.

Being able to shop for food in particular is an important factor in remaining independent in later life. Yet supermarkets continually change store layouts making it more difficult to find items at any age but especially for those with cognitive impairment. Clearly this has implications for the private sector and there has been some effort to address the needs of older people, for example, the piloting of ‘relaxed’ lanes and dementia-friendly checkouts in supermarkets. But ‘dementia friendly’ measures have been criticised for labelling people by diagnosis and more can be done to make stores fully accessible to older people. 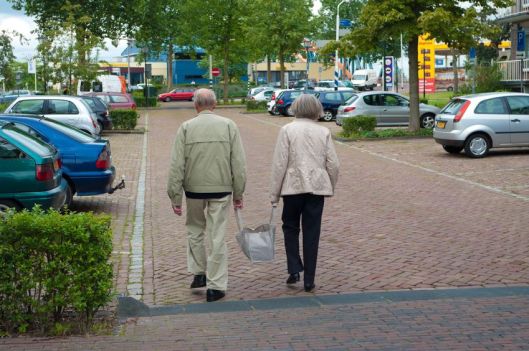 Shopping is known to contribute to physical fitness as a customary physical activity with around 40% of walking for shopping in later life. In my research I found that shopping trips involved a considerable amount of walking and, for some of the interviewees, walking for shopping provided their main form of physical activity. Indeed, many of the participants chose to go shopping in order to stay physically active and would walk to shops rather than drive or get others to shop on their behalf.

However, being able to shop in the first place may be constrained by people’s levels of mobility as well as their proximity to shops – especially with the changing structural nature of shopping. The decline of the high street is bringing about more closures of small independent shops, post offices and now bank branches. The move to out of town shopping centres and supermarkets makes it more difficult for people to go shopping, especially if they have health or mobility problems or do not have access to suitable transportation.

The relationship between shopping and health is bidirectional; thus, if you are healthy you are more likely to go shopping and if you go shopping you are more likely to be healthy. However, shopping activity provides an outlet for health-promoting activities and may provide protective factors that alleviate or ameliorate health declines as a regular excuse or reason to be physically, cognitively and socially active. Seen in this new light, shopping in later life is much more than the acquisition of food or other goods. Not only are older people going shopping, they are gaining health benefits from shopping activities that impact on their ability to age well.

On the basis of my research I have been involved in consultations with Tesco, along with Prof Debora Price and Dr Anna Goulding from the University of Manchester, regarding shopping habits in later life and the needs of older consumers.

I will also begin work on a small MICRA-funded project to look at age-friendly shopping practices in Greater Manchester. The project will develop a tool to assess how socially inclusive shopping areas are in terms of their physical and social environments. By working closely with older adults, we will explore the experiences and attitudes of people as they shop in Manchester city centre to establish the barriers and facilitators to social inclusion in these settings.

3 thoughts on “How might shopping contribute to healthy ageing?”

Please note that the views expressed on this blog are the views of individual members of the British Society of Gerontology, and do not represent the views of the Society, or any part of the Society. This is a space for debate and discussion by the many academics, professionals and people with an interest in ageing issues that form the membership of the BSG. If you are a member of the BSG and would like to be added as a blog author, please contact info@britishgerontology.org