The report from the Centenary Commission on Adult Education, launched last month, has received some strong endorsements from a wide range of institutions, Kellogg College and the UCU among them. Writing in the TES Kate Parker, for example, references its calls for a national strategy, a Minister for Adult Education, and the revival of life-long learning accounts. She goes on to highlight three more of its eighteen recommendations: the need to increase funding for adult community education services and further education colleges by £1 billion a year; a requirement for any organisation that describes itself as a university to provide adult education (AE) and lifelong learning, and an obligation on all employers to provide paid time off work for learning. Each of these points serves to underline the over-arching seriousness and ambition of the Commission’s work over the last year. It makes for a timely response to the recent UNESCO report which shows global performance on AE falls well short of international agreements on sustainable development goals – and with worsening inequalities. 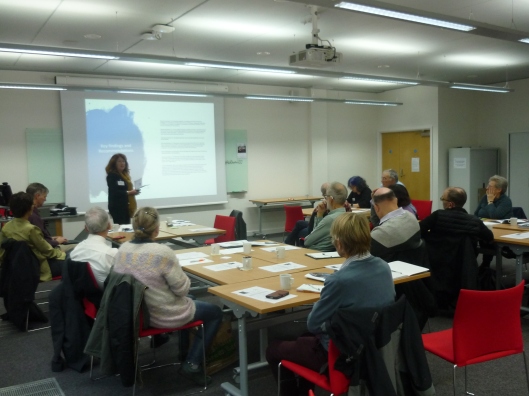 The Commission also called for a big change in policy. ‘Crucially’, Matt Waddup says, ‘our vision relies on a fundamental shift from the current competitive provider model to one based on collaboration and social partnership.’ Although there has been some dismay that the report makes only a couple of references to later-life learning* this over-arching collaborative model can provide a platform for new initiatives. So far neither the age-friendly movement nor the ageing better programmes have placed much – if any – emphasis on education, replicating a similar shortfall across the Better Government for Older People pilots of 1998-2000 – an omission memorably denounced by Vi Hughes in a speech at Coleg Harlech in 2001 (the intervention which gave birth several years later to theRansackers Adventure at Ruskin and Fircroft colleges, among others). But there is evidence from both programmes of innovative and determined approaches to informal learning activities at neighbourhood level. Such developments coincide with a growing movement of ambitious coalitions with explicit educational themes and political intent: London Universities and Community Groups Working Together is one such, the more long-standing Take Part approach another. And a new manifesto from within the ESOL movement indicates a growing self-confidence among adult educators themselves.

In this context our work through the Special Interest Group for Educational Gerontology at the BSG has created an opportunity. All three of the partner groups responsible for the SIG made written contributions to the Adult Education 100 commission. The fourth age-inflected commentary came from Rob Hunter of Leicester Ageing Together, a member of the SIG who took part in our pre-conference event in Manchester in 2018. Our recent joint meeting in Nottingham with the Technology and Ageing SIG gave encouragement to those of us who think that a renewed emphasis on active citizenship offers a bridge between the politics of later life and the well-being of individuals who rise to its challenge. Henry Tam’s recent book ‘Whose Government Is It?’ groups fifteen chapters around the theme of ‘state-citizen cooperation’ and draws on a range of perspectives from left of centre to offer a substantive way forward. There is material on community development, community education, collective control and engagement with complex policies. And, amazingly, alongside one called ‘Young People and Everyday Democracy’ is that rarest of all rare birds in a collection such as this – a chapter on old age. And what a chapter! Marion Barnes ‘Old Age and Caring Democracy’ is a memoir of a working life in the field, a judicious exploration of participation and campaigning and a daring proposal to reconcile the purportedly conflicting claims arising from the third and fourth age life worlds. It’s my nomination for gerontology paper of the year. If your university hasn’t got very far with its engagement of older people in lifelong learning here’s the inspiration you need. 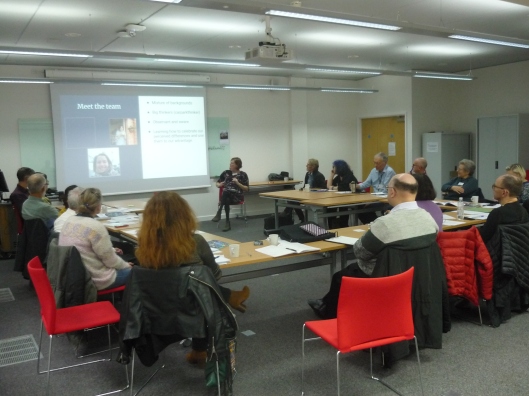 Katherine Brown of Crafting Relationships presenting to the Joint SIG at the Institute of Mental Health, Nottingham University

Connecting the discourses of participation and quality in education is not going to be easy. Their theoretical intentions and policy goals can be made to appear very different. All sorts of vested interests will get in the way from both directions. And regardless of the outcome of the election there is unlikely to be a great deal of new money. Perhaps, for the moment, not a lot can be demanded of local authorities but the less welfarist funding bodies – it was the Esmee Fairbairn Foundation that part-funded Ransackers, for example – could surely be persuaded to take an interest. Institutional groupings like MICRA and the Newcastle set-up already have the infrastructure. As we’ve found rather painfully in the SIG over the last two years the demand from older people’s associations has largely been missing – ‘activity’ and ‘creativity’ rule outside the U3A – but if gerontologists don’t exist to tackle that disjuncture who does? The self-direction so much prized among older people (now almost a mark of distinction) can’t be allowed to lapse into self-satisfied withdrawal. And in truth this isn’t quite the case: older people are an often dominant organising presence in many areas of community life. But as Marion Barnes’ chapter perhaps unintentionally indicates, without the intervention of researchers like herself this dominant presence rarely extends to the broad thrust of policy and practice around later life itself. If this is a bridge we must once again build then a notion of education, however reconfigured, will be one essential framework.

*Encouragingly, in some ways, the question of an ageing population is best dealt with in the report’s preface by the Bank of England’s chief economist, Andy Haldane.