At the end of last year there was a brief exchange on Twitter between Charles Musselwhite and Libby Webb. The BBC had just announced a new study at Glasgow Caledonian University under the headline ‘arthritis patients’ “need slower green man”’. Charles reported from a site-specific study carried out in Shrewsbury, Chester and Caernarfon where only 11% of older participants – mostly better off, healthier men – could match UK guidance on crossing speeds. Meanwhile Libby and her colleagues had drawn on data based on more than 30,000 observations of the walking speeds of 10,000 participants in the English Longitudinal Study on Ageing across its seven waves between 2002 and 2014. 90% weren’t achieving the necessary speed: the richest were five times more likely to be able to cross the road than the poorest and the differential increases markedly with age. Presenting at the first Kilburn Older Voices Exchange (KOVE) Age Research Forum last Thursday, March 8th, her anger that only 1.5% of women over 80 would be able to make it across in time was palpable. 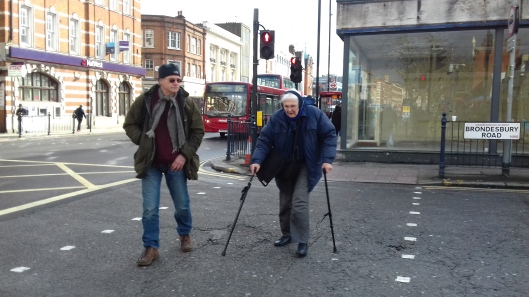 KOVE has been filming road crossings and talking to pedestrians about this issue since 2004. Rita Newton joined us at an earlier Kilburn Debate in 2011 at a time when we had a working conversation with Transport for London and Camden’s transport planners. Austerity may have undermined that collaboration to some extent. The latest iteration of our campaign follows recent discussions in our community development forums and responds to the passionate intervention of Margaret Gibbs, a KOVE steering group member whose impairments prevent her from meeting the walking speed of 1.2metres/second on which the design guidance has been based. In February this year Mel Wright and I took to the streets with her on Kilburn High Road. As you can see in photo above, the green man behind us has already turned to red: we are stranded barely half-way across in the next phase of the traffic management cycle. (The picture also – as Margaret pointed out – shows the poor condition of the road surface).

Our research forum drew over 40 people in the course of the day, around four-fifths of us in later life, the eldest 90. A strongly interactive discussion flowed, first from Libby’s exploration of the health benefits of the bus pass, and then from the policy suggestions with which she concluded her presentation. These were: that crossing times be extended in the public interest; that crossing signals be made more ‘intelligent’ (whether through sensor systems or user-led smart cards), and that more crossings be converted to countdown systems. Rumours abound that crossing times vary between different parts of the country – but it was acknowledged that the main variation is often just the width of the road. On the other hand, as Violet Clarkson pointed out, there are too many crossing types. Sarah Selman from CONNECT Hackney called for a single point of contact where public information of that sort could be explained, updated and made accessible. (Another useful piece of information might be that pedestrians are at slightly greater risk of fatal road accidents than cyclists – although the latter have a considerably higher risk of injury.)  I had wondered if intelligent systems might contribute to a sense of stigma: there was some sympathy for such a view but Eleanor Burke, who is blind, swayed the room with a defiant reminder that disability access is a right rather than a privilege or favour. Professor Sheila Peace put this discussion into its legislative context, pointing out that many changes with which we are familiar followed from the Disability Discrimination Act (1995) but noting that its more complete implementation had stalled or slowed in recent years.

There were six reports from the round-table discussions. None identified the countdown crossings which seem to have been the favoured response of policy-makers and engineers – one person described the countdown itself as deceptive: what looks like seconds she found more rapid. Instead three groups favoured intelligent systems and three the aim of achieving a universal slowing down. The distinction could be said to be between a pragmatic, enabling approach to equality and the more idealistic goal of recapturing the streets as part of the public domain. The challenge for this perspective – as always with the inclusive-of-all-ages construction of ‘age-friendly’ – would turn on the question of degree. Even a quite radical slowing down might not be enough for Margaret.

What should now follow in London is a sustained period of experiment and debate involving politicians, public bodies, campaign groups, technicians and the older public. This will take a lot of hard work. To date the age-friendly movement has often set relatively easy targets: slowing down and reducing urban vehicle traffic tackles the neo-liberal city head on. Moreover, there hasn’t yet been much of a call for change: the only mention of it, for example, from respondents to Jane Scobie’s very useful recent consultation for the Greater London Authority (GLA) comes from her report of an interview with KOVE’s Lynda Stuart (Scobie, 2018, p 12). If you’re inclined to think none of this matters very much track back to the social epidemiological data. Only three out of 200 women over 80 can make it across the road. The thoughtfulness they often report from individual drivers can be no excuse. And to that extent the universalists are absolutely right. Legislating for a more inclusive world will make it slower and safer. KOVE is looking to work with others in London to build real pressure for change.

KOVE is funded through Ageing Better in Camden.