Next week, from October 14th in fact, is Camden Intergenerational Week, the third bi-annual celebration since Vanda Carter, formerly the borough’s intergenerational officer, set up the first in 2013. Thirty activities are listed over eight days, the majority taking place at community centres dotted across the borough. The week has been supported by Corinna Gray, the wonderfully industrious partnership development officer of Ageing Better in Camden, who works to a tiny steering group which I have the privilege to chair. The Camden Intergenerational Network has no direct funding and the week relies largely on the initiative and risk-taking of local project leaders and individual facilitators but also on a recent public health project focused on family learning. Protagonists are either varying their standard demographic to make it more age-inclusive or showcasing something they already do on a regular basis. Community arts practitioners offer some of the most imaginative opportunities and the animator Bunny Schendler will be out and about making a short film during the week. Besides old favourites this year’s programme features new contributions from the Freud Museum, North London Cares, the Camden Parents Council and the community partnership that make up Camden Health Kick. 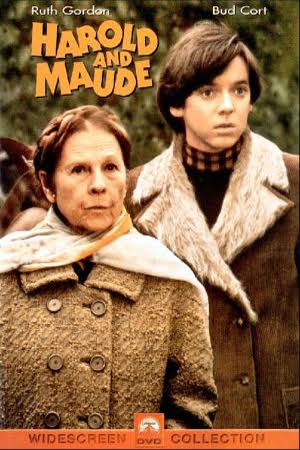 The film has not worn too well but the zany cross-generational romance at the heart of it is still provocative and its denouement worth troubling over. When we showed it in 1982 on the Hackney Pensioners Film Circuit it divided opinion: several wardens intervened to cancel showings in sheltered blocks after word got round of walkouts early on. But later in the run it drew standing ovations. KOVE’s Reel to Reel Film Club normally starts after lunch but on this occasion it’s delayed till 5pm in the hope of pulling in a 15+ after-school audience! On Wednesday Myra Newman will guide one of KOVE’s Bench to Bench walks in Belsize Park. We’ll then link up with youngsters from Elfrida Rathbone at a Mad Hatters team-party in the volunteer-run Belsize Library, one of two events during the week held to honour the 150th anniversary of the illustrator Arthur Rackham. Finally, on Thursday the Kilburn and West Hampstead Pensioners Action Group will be meeting CG3 youth worker Seun Ilenda to hear about the issues facing young women in Somers Town.

Building a more age-integrated society in England is an uncertain and complex project and to date no more than a peripheral policy concern. The role intergenerational practice can play in accomplishing such an outcome has its limits: better social relations will be valuable but without structural change it is not clear how much can really alter. Restructuring the life-course to reduce the collision between peak earning and parenting and to allow the organised relations between education, work and leisure (and you would now have to acknowledge, consumption) to evolve and intertwine pretty much from birth to death is a task for the resourceful, patient and long-sighted.  But its also necessary to acknowledge the unpredictable. A year ago no-one had picked up how far the Labour Party might go in refitting itself as what Martin Kohli once described as an ‘age-encompassing organisation’. Nor could you have anticipated Sadiq Khan’s discomfort as the youthful London middle class revolts against Transport for London refusing a licence to Uber. And while there’s plenty I might object to in Rhiannon Lucy Cosslett’s recent characterisation of men like me as ‘centrist dads’ there’s not enough to escape the hook entirely. Essentially, generational relations, to all but sentimentalists, will always be marked by ambivalence. As the anthroplogist Marc Auge has it we are free in time but bounded by age: sadly, that’s an existential truth, not a choice of options.

I’d like to see the Camden Intergenerational Network develop as a robust arm of local civil society – not least by acquiring more young members. To get there we need to find ways around the many institutional barriers which make sustained collaboration so difficult. Some initially promising discussions between Ageing Better in Camden and the Young Camden Foundation, for example, have stalled but these can surely be resumed. Camden Council might revisit its ground-breaking Quality of Life Strategy from 15 years ago and engage all over again to rework the principles it once endorsed. Meanwhile, drop by and get involved.